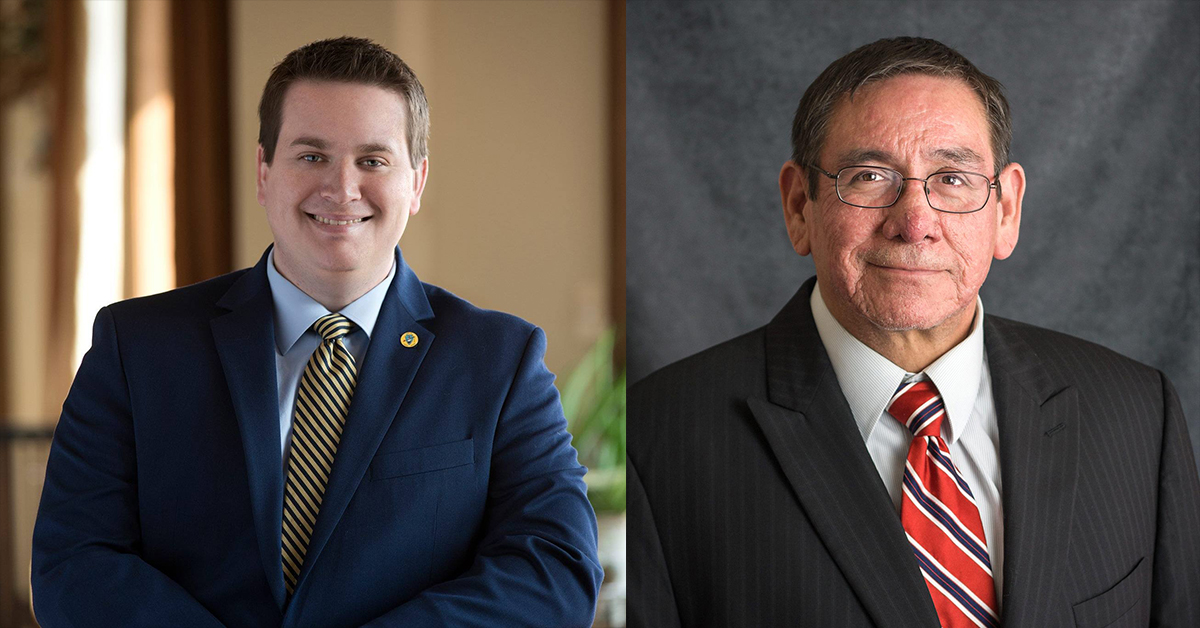 Due to the COVID-19 pandemic, the two legislators invited the Osage public to their “Congressmen on Your Corner” town hall held on Zoom. Both discussed their legislative items filed for consideration in the 2021 Hun-Kah Session, which started March 29 and lasts 24 days.

Potts encouraged the Osage public, including approximately 20 attendees, to stay engaged, in contact with the Congress members and to follow them on social media for more information and updates as the session continues.

The discussion revisited recent changes to the Nation’s health benefit law, which was revised in the 2020 Tzi-Zho Session to include an annual enrollment deadline each December for the following calendar year. The health benefit is available to Osages who enroll by the deadline who receive a debit card for health-related expenses with $500 for Osages ages 64 and younger and $1,000 for Osages age 65 years and older.

Potts and Maker opposed the amendment in bill ONCA 20-79 passed by majority vote over concerns the deadline creates limits for those interested in enrolling.  Despite the deadline’s approval, Potts encouraged people to be aware of the deadline for themselves and others. Also, in a separate bill ONCA 20-83, Congress voted to amend the health benefit law “to prohibit the accrual of unused benefits,” which eliminated the annual rollover of unused health benefits.

Maker said he also opposed the annual enrollment deadline but added he is pleased the Congress passed a health benefit law amendment bill in January, which added an amendment he proposed to reinstate health benefit accruals for two years for Osage elders age 65 and older. Both bills ONCA 20-79 and ONCA 20-83 were filed by Congresswomen Jodie Revard and Paula Stabler citing the need to manage the increased spending associated with the health benefit programs.

For the Hun-Kah Session, Potts discussed legislation filed for consideration including ONCA 21-19, which is to amend the Matching Grant Fund in Osage law to authorize up to 40% match expenditures on intergovernmental grants for municipalities serving Osages. “If you have Osages living in your municipal boundaries, we want to be a resource for you, this is not a guarantee of funds, this is not a demand, this is an option,” for those entities with needs including utility infrastructure improvements,” Potts said.

Potts also filed bills ONCA 21-20 and 21-21 seeking to establish a legal assistance program for Osages with a proposed $50,000 initial appropriation for the program. Potts said he sponsored the bill to establish a resource for Osages with general and no-contest legal questions, which includes personal wills, estate and probate issues.

Another bill is ONCA 21-22, which is to amend the Economic Development Fund to authorize small business loans eligible for forgiveness out of the Fund to Osage-owned businesses. Potts said the proposed bill is similar to what the federal government did in 2020 for small businesses with the focus on small businesses that are at least 51% Osage-owned as part of increasing economic development.

Bill ONCA 21-26 seeks to increase the hourly minimum wage paid to ON government employees in four consecutive increments. Potts said he would like to see the minimum wage increase from its current $11.50/ hour to $15/ hour by Oct. 1, 2024. In addition, Potts said he filed resolution ONCR 21-05 requesting the ON Gaming Enterprise to submit a plan to increase wages for Osage Casino employees by 2022.

Maker told the attendees he filed ONCA 21-34, which is an act to authorize and appropriate $50,000 as a contribution to the Francois Chouteau & Native American Heritage Fountain. According to the bill, the Heritage Fountain is seeking contributions toward the construction and maintenance of a proposed park and memorial fountain in Kansas City in honor of French trader Francois Chouteau and the area Native Americans when they established a trading post in 1821.

Maker said he attended the fountain’s groundbreaking along with Language Department Director Vann Bighorse and they provided an Osage prayer and greeting remarks during the event. “It honors the Osage Nation and the founders of Kansas City,” said Maker who added the fountain director said the organization is still seeking contributions and “I think it’s something we can be proud of.”