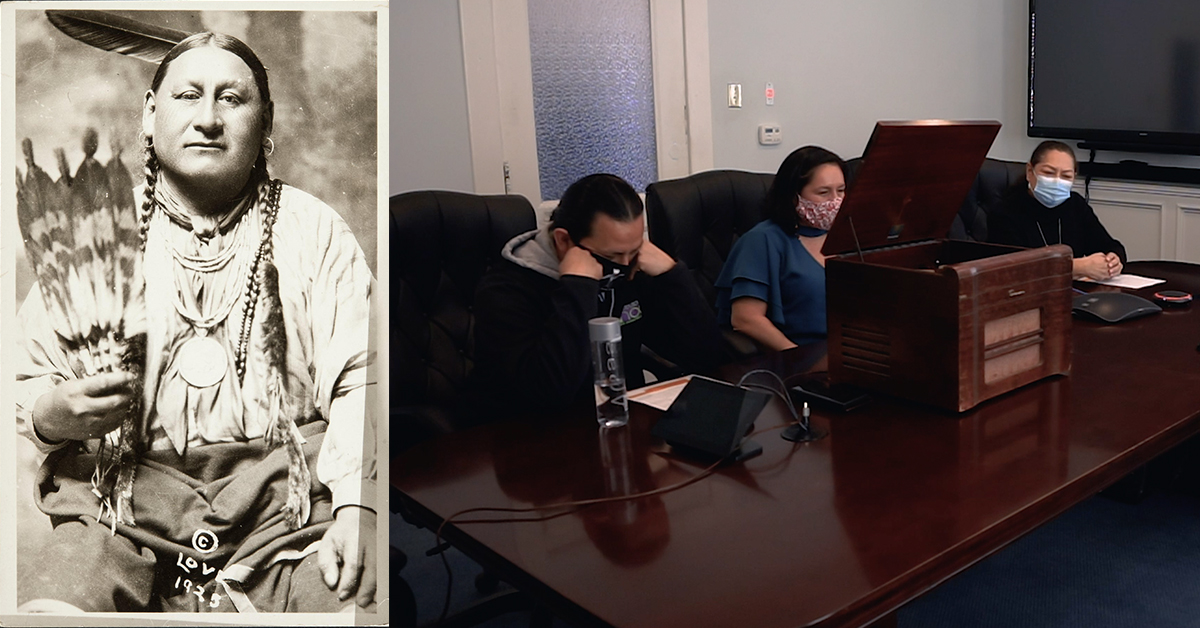 Photo caption: No^-pa-watha II, Henry Pratt, circa 1925. Pratt was full blood Osage and served as Assistant Principal Chief of the Osage from 1928-1930. In the second photo, his descendants listen to a recording of his voice on Feb. 22. From left: OJ Littlecook, Congressional Speaker Angela Pratt, and Janis Carpenter. CODY HAMMER/Osage News

Rick and Judy Wilkins, longtime family friends of Assistant Principal Chief Raymond Red Corn, donated a record to the Osage Nation Museum that is a recording of Osage leader Henry Pratt giving a speech in the Osage language.

On Feb. 22, Red Corn invited Principal Chief Geoffrey Standing Bear, teachers from the Osage Language department and some of Pratt’s descendants to listen to the recording. One of those descendants was his great-granddaughter Janis Carpenter.

“I’ve heard the recording before. In fact, we do have a recording of that speech at the language [department] but we don’t have the actual record of that time,” Carpenter said.

Red Corn said the donation was given in remembrance of his mother and father, Raymond and Waltena Red Corn.

“Having this come to us to stay and to provide additional research, even if we have some of the material, the clarity of the recording itself is very beneficial and I am personally indebted to Rick and Judy,” Red Corn said. “I think we all are for their donation.”

Henry Pratt was the son of Thunder Fear, or No^-pah-watha (or No^-pah-walla), an Osage leader during the 1800s who was known for his ferocity in battle. His name was given to him because, like the thunder, he inspired fear in others, according to John Joseph Mathews’ book, “The Osages.”

According to the Osage Allotting Commission of 1908, Pratt was born in 1865 on the Osage’s Kansas reservation. He was around six years old when the Osage walked to Oklahoma in 1871. He was of the Sky Clan and the Claremore band and his father was their leader. Pratt was named No^-pah-watha II, Carpenter said.

When his family arrived in Indian Territory, they chose to settle east of the Twin Mounds, just northwest of Hominy near a spring with fresh water. It was an area Osages’ called “the second camp on the third buffalo trail,” Carpenter said.

Carlisle was the first government-run boarding school in the United States. It was founded by Civil War veteran Lt. Col. Richard Henry Pratt, who is infamous for the phrase, “Kill the Indian, Save the Man.”

Carlisle, located in Pennsylvania, operated from 1879-1918. The controversial school forced the children to stop speaking their languages, practicing their religion, their customs and cut their hair. While in operation, 186 students lost their lives at the school.

Another practice of the school was taking away a student’s name and giving them an English name. Variations of the name Richard Henry Pratt, the school’s founder, can be found within many tribes throughout Indian Country.

While at the boarding school, No^-pa-watha II was given the English name of Henry Pratt. He most likely would have been between the ages of 14-20 when he attended.

Deciding he didn’t like the school, he left on foot and traveled home, Carpenter said. According to Google Maps, if he was traveling from Pennsylvania on foot, it would have taken him over two weeks to make the journey. As he got closer to home, he passed through the Ponca Tribe’s territory, which is just north of the Osage Nation near the Kansas border. The Ponca saw that he had been on a long hard trip. They took him in and took care of him for several days, Carpenter said. Once he was ready, he traveled the rest of the way home.

Pratt married Josephine Chouteau and had four sons and six daughters, however, three of those daughters died at birth. Of the surviving daughters, the oldest was Helen Pratt Matin, Carpenter’s grandmother.

In Mathews’ “The Osages,” Pratt was considered a young man of character and standing in the community. In 1890, he became the Territorial Sheriff in the Claremore District and would have been in his early to mid 20’s. He was a large man, standing over 6 feet tall.

He was also instrumental in establishing the Hominy Inlonshka and was the first Head Committeeman of the Zo^Zo-Li^ District, Carpenter said. This is why his song has always been the first song on Sunday afternoon at Hominy Inlonshka.

He had a Native American Church fireplace on his lands and was one of the last members of the society of Little Old Men, the No^.ho^.zhi^.

From 1928-1930, he served as Assistant Principal Chief of the Osage, he would have been around 63 years old.

Toward the end of his life, he had several homes and land, in and around Hominy, she said. Some of his descendants still live on his original allotment. He died around the age of 84.

In 1912, Ales Hrdlicka, the Smithsonian’s curator for physical anthropology, commissioned 10 busts of the Osage by Frank Micka, according to the Smithsonian Magazine. Micka traveled to Pawhuska and chose 10 individuals, including Henry Pratt. He took photographs of them and covered his subjects’ faces, ears, necks, and upper chests with wet plaster to make casts for the molds. Pratt would have been around the age of 47.

Once finished, the busts were displayed by the Smithsonian as part of a Native American culture exhibition in San Diego in 1915.

In 2004, the Osage Nation Museum began acquiring replicas of the busts and Henry Pratt’s bust was acquired in June 2009. The ONM displays the busts in the lobby of the museum, which is located in Pawhuska on the Osage Nation campus.