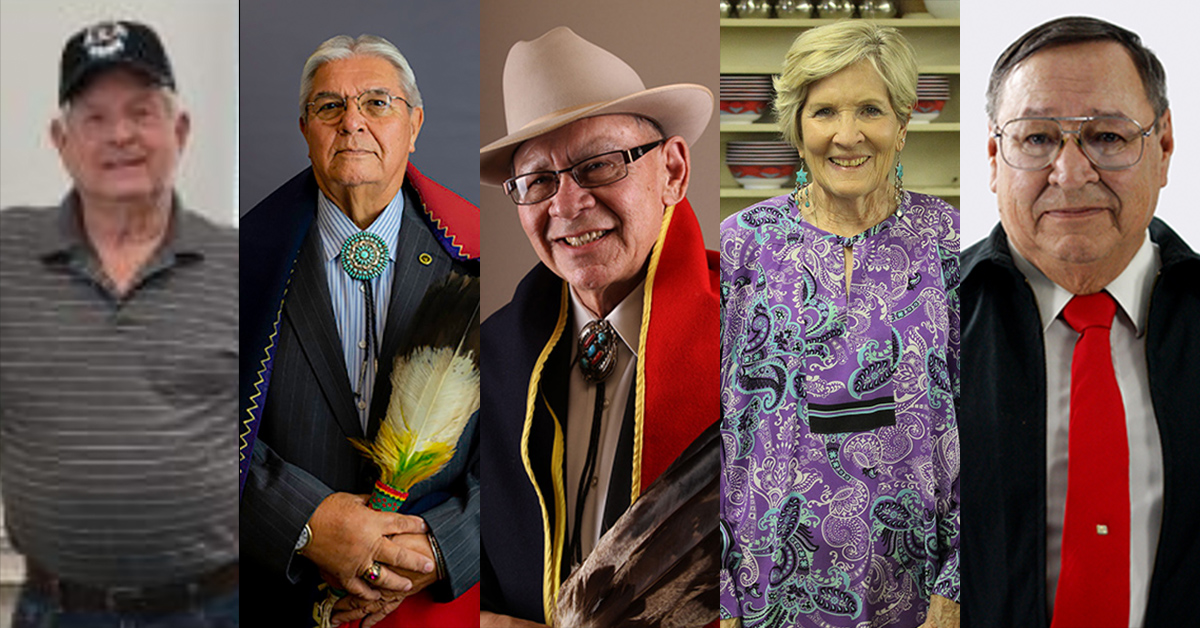 Darrell Boulanger, Archie Mason, James Norris, Candy Thomas and John Williams are among this year’s 47 Native American elders who come from 23 Oklahoma tribal nations. Honorees were selected based on their achievements, community service and impact, according to AARP Oklahoma.

Due to the COVID-19 pandemic, AARP Oklahoma did not host an in-person ceremony as in past years. Last year’s honorees were also recognized virtually in lieu of a banquet ceremony usually held in Oklahoma City. A virtual recognition for the honorees was held on Nov. 12.

“As this pandemic continues to unfold and create a sense of uncertainty, one thing remains unwavering and that’s our elders’ brilliance and resilience,” AARP Oklahoma State Director Sean Voskuhl said in an online video announcing this year’s honorees. “Our elders connect us to our past, keep us mindfully present and inspire future generations to become better curators of communities and cultures.”

“Since 2009, we at AARP Oklahoma have honored nearly 593 Native American elders from Oklahoma’s 39 tribal nations. Due to COVID-19 precautions this year, we are sadly unable to host the in-person celebration,” Voskuhl said. “However, this year during Native American Heritage month, each of our honored elders will personally receive an AARP Oklahoma Indian Elder Honors celebration package complete with their honoree medallion and a program of spotlights, their photos and biographies … These honored elders are beacons of hope and inspiration and embody AARP’s mission and vision as they inspire others to serve.”

Honorees and their biographies

- Darrell Boulanger and his family are long-time residents of Osage County. Mr. Boulanger spends his time caring for his Osage family cemetery. The Boulanger family home was featured in the film “August: Osage County,” a point of pride for the whole family. Mr. Boulanger is very proud of his Osage heritage. He is known as a very caring man willing to assist his community and his fellow Osage tribal member however he can.

- Archie Mason finds joy and fulfillment while serving others. Mr. Mason holds a Bachelor of Arts in Education and a Master of Education from Northeastern State University. He has also completed post-graduate studies at the University of Tulsa. Mr. Mason touched countless lives as a teacher at Tulsa Public Schools and Rogers State University. He is currently a Bacone College ambassador. For 14 years, Mr. Mason kept the interest of the Osage people top-of-mind while serving in the Osage Nation Congress. Mr. Mason proudly advocates for his Osage and Cherokee cultures, languages, histories, values and traditions. He participates in Native cultural events and intertribal powwows and serves as Head Committeeman for the Grayhorse District I’n-Lon-Schka ceremonial dances. Mr. Mason is a 20-year member of the U.S. Selective Service System. He was appointed by President Bush and subsequently appointed by President Obama to the Oklahoma Selective Services System district appeals board. Mr. Mason is involved in numerous organizations including Rotary International, Oklahoma Indian Baptist Association, Phi Delta Kappa and American Indian Children with Disabilities. He is also active with Sigma Tau Gamma, NSU Alumni Association and the National Association of Campus Ministries.

- James Norris is a dedicated family man who has selflessly served his community and country. He enlisted in the U.S. Army and served in the Vietnam War. After service, he worked in health care management for nearly three decades, ultimately as Chief Executive Officer for the Oklahoma Area Indian Health Services Pawnee Service Unit. Cmdr. Norris provided planning, leadership and direction to implement a $15 million comprehensive health care delivery program for north-central Oklahoma. He was also designated as the senior team member responsible for planning, designing, staffing and constructing a new $14 million health center. Cmdr. Norris excelled at establishing and maintaining relationships with civil and governmental groups and organizations to promote IHS. Cmdr. Norris also served as an Osage Nation Congressman for four years. Cmdr. Norris participates in the I’n-Lon-Schka dance each year. For many years, he has held a position on the Pawhuska Drumkeepers Committee for the Wa-Xa-Ko-Li’n district. Cmdr. Norris also serves on the commission responsible for constructing the award-winning Osage Veterans Memorial in Pawhuska.

- Candy Thomas was born and raised in Tulsa. After graduating from Edison High School, Ms. Thomas received a bachelor’s degree in sociology and a minor in political science from the University of California, San Diego. Ms. Thomas’ career has been primarily in the public sector as an employee and independent consultant to cities, counties, non-profit organizations and government. She has written and administered more than $30 million in community and economic development grants. Other roles include serving as a community outreach coordinator for two private entities and working with the Osage County Industrial Authority to help develop the Pawhuska Business Development Center. Ms. Thomas served as executive director for the Pawhuska Community Foundation Fund and Osage Nation Gaming Enterprise Board secretary. Ms. Thomas has worked for the Osage Nation since 2014 as the director of self-governance and strategic planning. Her department is responsible for the administration of the Indian Health Services compact and funding distributions and the Bureau of Indian Affairs Multi-Year Funding Agreement, which supports tribal direct service programs. Ms. Thomas also assists the Osage Nation with the development and oversight of federal grants and other federal funds. She is currently working on creating and implementing a community development financial institution to serve as a lending institution for Osage tribal members.

- John Williams has lived a legacy of valor, leadership and service and has impacted lives worldwide. Mr. Williams graduated from Fairfax High School and attended Oklahoma State University. While in college, he enlisted in the U.S. Army in 1967. Mr. Williams served in Vietnam as a Special Forces senior medic and was awarded a combat medical badge and the highly heralded Bronze Star medal. Mr. Williams began his medical career in 1970. Over the years, he worked as a physician assistant, director and chief executive officer to health clinics and hospitals across the country and in Indian Country. Service locations include the Alamo Navajo Reservation (N.M.), Jicarilla Apache Reservation in Dulce, N.M., Winnebago (Neb.) Hospital, Pawhuska IHS Clinic and the Lawton (Okla.) Indian Hospital. Mr. Williams is an active committeeman for the Grayhorse District, serving as an advisor to the Drumkeeper. He currently serves as an appointed governmental affairs advisor to the Osage Nation Principal Chief. In this role, Mr. Williams is the liaison to the Osage sister nations, tribes and states, bridging the gap of the Osage people, its history and future. Mr. Williams also served as a cultural, language and historical advisor for the “Killers of the Flower Moon” movie.